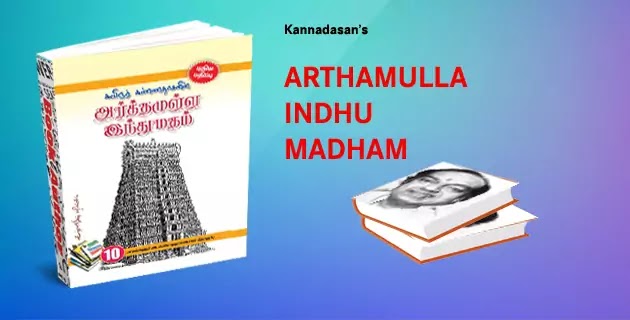 Arthamulla Indhu Madham is a non-fiction religious genre book which is written by Kannadasan in tamil language. He was born on 24th June 1927 in Chennai. He was an Indian philosopher, poet, tamil song lyricist, producer, actor, tamil film script writer, editor and philanthropist.

Kannadasan has written many hinduism related books and notes. He has affection to Kambar. Before he was an atheist guy who opposes religions. When he started to read kambar books, then he turned into religious. He admired Kambar.

AIM was published by Vanathi Publishers in Chennai. He has no idea to write this book until Annadurai (ex. Chief Minister of Tamil Nadu) published ‘The Kambarasam’. The book has written to curse kambar’s literacy.

Kannadasan has saying that when he started to read kambar, he was addicted to his writing. When he was an atheist, to mock religious he rode periyapuranam, kandha puranam, ramakadhai, thiruvasagam, thiruppavai, thiruvembavai and naalayira dhivya prabantham. But eventually he was changed his mind to religious. Then, he became a Hindu spiritual writer.

He thought an atheism is all about politics and there is no feelings in it. Despite he was a philosopher.

Thanks for visiting the book from our Tamil Book Store site. If there is any broken links, comment below.